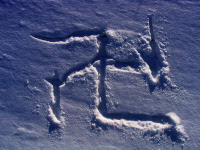 Last May Brendan Steinhauser, campaign dir. for FreedomWorks, an organization that coordinates Tea Party activists, said: "We don't want the worst elements to take this over,” referring to racist that have popped up regularly throughout the Tea Party.  But without a central organization, there isn’t much to control this conglomeration of crackpots. There have been incidents of derision against Barack Obama with observers who say the president's skin color is a powerful reason behind the movement's existence.  Pathetic.

And then John White reared his ugly head in Arizona.  DA Morales did an excellent expose in the Tucson Citizen titled: “Profiles of the Tucsonright-wing: fearful Christian men with guns who are ready to kill.”  This is a must-read for any person who thinks these Tea Party nuts are just harmless political fanatics.  This is posted on Facebook for all to see but Morales has capsuled the most bigoted and erratic statements in his articles.

Things like, “Democrats are a cancer and you do not cure cancer you cut it out and kill it.”  In another post he says the Gabby Giffords shooting was only a training exercise put on by the Dept. of Homeland Security.  Another, “…If you vote Democrat, then you voted for hell.”  And then there is his neo-Nazi friend Harry Hughes who also hangs out with J.T. Ready who is of the same ilk.  John White is a dedicated Tea Party member who not only is a racist and neo-Nazi, but who also condones killing democrats.

There are more quotes from White.  “A civil war is near, a cleansing…perhaps an ethnic cleansing?  You are not taking a life…you are saving a nation.”  This is pretty heavy stuff when you consider that these maniacs can arm themselves to the hilt in the state of Arizona with some of the loosest gun laws in the nation.  There is a picture of Harry Hughes with his neo-Nazi friends, all of which look like they are holding AK47-like weapons.

According to Gallup and Pew Research Cos., Americans’ views of the TeaParty are at the “lowest ever.”  Gallup notes that in a drop from a support level of 30% to 25% in recent months, more Americans hold intensely negative feelings toward the movement.  Based on this one must assume that the U.S. public must be light years smarter than the morons in Congress that constantly cow tow to TPers.  More pathetic.
at September 27, 2011