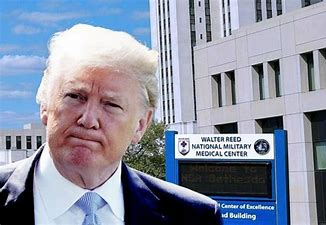 Let's see, this is what we know so far. Donald Trump announced late Thursday that he and Melania Trump have tested positive for COVID-19. There are reports he knew he had been exposed when Hope Hicks reported she had the virus earlier, but Trump still attended a fundraiser in New Jersey, potentially exposing several Republican donors. T-rump, of course, rarely wears a mask. Then he was mysteriously whisked away to Walter Reed Hospital.

"The President's vitals over the last 24 hours were very concerning and the next 48 hours will be critical in terms of his care. We are still not on a clear path to a full recovery."

As usual, it is hard to believe those closest to Donald Trump because of all the misinformation and lies that have come from him in the last four years. Conley stated flatly Trump is not receiving oxygen, yet, again...

"a source close to the White House said Trump has received supplemental oxygen since his illness began. Trump 'definitely has had oxygen,' the source said, adding that it was on Friday."

Conley couldn't even get the reported date of the announcement correct and commented, "that the President had a fever at one point, but refused to say what it was." Although Trump proclaims that he feels fine, "the treatments administered to the President in the past 24 hours have raised concerns about his condition." While still in the White House, he was given...

"the experimental Regeneron polyclonal antibody cocktail, a promising treatment that has not yet been approved by the Food and Drug Administration."

Then after arriving at Walter Reed, he was administered the antiviral drug remdesivir. In the case of both of these drugs, experts have said that they are normally given to the more serious coronavirus patients. And then a rash of notices of the virus from former aide Kellyanne Conway and Trump campaign manager, Bill Stepian, both in close contact with T-rump. Add to that a third Republican Senator plus former New Jersey Governor, Chris Christie.

But Donald Trump is still in charge, not yet turning control of the White House over to his second in command, Mike Pence. And this probably wouldn't happen unless he suffers the ultimate. Like the earlier source said, "the next 48 hours will be critical in terms of his care." The world is watching and one can only hope that the White House gang will put misinformation aside just this once and give us the truth on Donald Trump's condition.