According to the United States Election Project at , 2,214,807 people had voted in the 2012 election as of October 18.  Paul Gronke, who runs the estimates that 40% will vote early this election, compared to 30% in 2008.  Also in 2008, 91% of the domestic ballots mailed were returned in huge amounts for Barack Obama, according to a recent report from CNN. 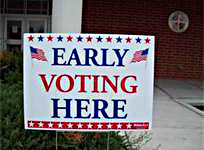 ﻿
Although the early vote was trending Republican in early October, a later report by Reuters says the polls show that Obama has a “comfortable” lead over Romney with early voters.  Battleground Watch reported on four states: , , and , two critical to the candidates, one leaning Obama and one leaning Romney.  The very important two are and , likes Obama and No. favors Romney.

There are some160.3 million registered voters in the , a mere 68% of the voting age population, which is, in itself, pathetic.  But when you look at other countries around the world, it is dismal compared to 100 percent of Argentinians, 97 percent of Brits, 93 percent of Canadians and 77 percent of South Africans.  Many Americans just don’t give a shit, and this is reflected in the low-life kind of congressional, state and local government we are stuck with in some cases.


Republicans have strived in this election cycle to make it even harder for some to vote, primarily those who vote Democratic.  They have indiscriminately purged voter files and championed Voter ID when voting fraud is virtually non-existent.  And the GOP has even tried to stop early voting because it doesn’t favor their candidate.  Not necessarily the hate tactics of Karl Rove under George W. Bush, but certainly an extension of Rovian politics.

﻿
﻿John King of CNN asks the question of who benefits from early voting.  To find out he went to the state of where Presidents have traveled to for years to try and get the pulse of the nation.  In , which is home to the , early voting accounted for 55% of the total compared to statewide of 36%.  Demand for early ballots are up significantly from 2008 and Democrats have a big edge; 12 to 1 over Republicans in .

Does that mean that Democrats are smarter than Republicans?  Time did a study in 2010 that found this saying on college campuses: “The College Democrats are said to be ugly, smug and intellectual; the College Republicans, pretty, belligerent and dumb.”  On a more serious note, the study attempted to determine that if conservatives are dumber, why?  A non-partisan researcher found:

﻿
﻿If you are wondering just how important early voting is to the candidates, back to that bellwether state of .  Although the state has only six electoral votes, President Obama made repeated visits there because has more than a month of early voting.  In contrast, says Ben Jacobs of the Daily Beast, he has paid less attention to another battleground state, .  Even so, Obama is up 4 points in over Romney.