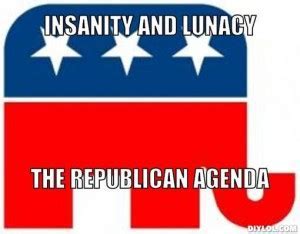 I guess I am picking on Republicans but what can you say with the antics from those like Lauren Boebert, Paul Gosar, Marjorie Taylor Greene and Ron Johnson, to name only a few. The first three are members of the House, Johnson a Senator. Don't get me wrong, there are accusations of Democrat lunatics. Googling that, one in particular came up in the search. Congressman Steve Cohen from Tennessee. Didn't find much more than an incident in Trump's impeachment.

So, I decided to see what Cohen stands for and found his issues far from lunacy. As an example, Cohen supports Biden's Student Loan Debt Relief; also for the President's pardons for marijuana possession; the congressman wants to name Russia a state sponsor of terrorism. Whatever Cohen says, it can't compare with statements like "the Lord has washed me in the blood of Jesus," from Georgia Senate candidate Herschel Walker. Bill Maher dubs him an "idiot."

But it is Arizona's gubernatorial candidate, Kari Lake, who takes the cake. Her 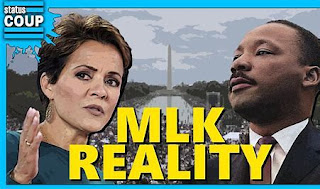 most recent idiocy was a claim...

So ludicrous it doesn't justify a reply. But MLK's daughter fired back...

King's daughter called Lake's claim absurd and noted that saying something like that was being dismissive of her father's 'seminal work and beliefs.'" 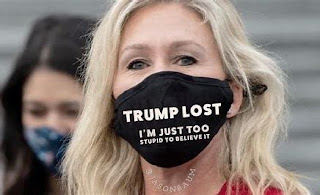 And, did you catch Georgia Rep. Marjorie Taylor Greene's latest stupidity?  She tried to make a show of herself standing up for Confederate soldiers and in her typical ignorance...

"despite Greene’s apparent rush to pay her respects to what she believed was a Confederate monument, the monument actually pays tribute to Union troops that battled the Confederates."

In The Ring of Fire progressive post by Farron Cousins, he comments...

"Two factions within the Republican Party are fighting for dominance right now, and the lunatics are winning by a lot. The Gaetz’s, Jordan’s, and Gohmert’s are the ones making the rules now, as they are the ones with the biggest reach and the ones being amplified by right wing media."

As Cousins exclaims the lunatics are winning, he adds more to the gang: "your Josh 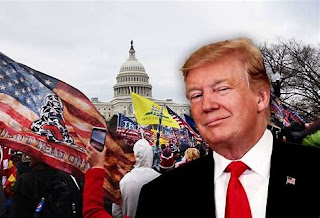 Hawley’s and your Ted Cruz’s and of course your Rand Paul’s." The proliferation of these whackos, of course, started with the administration of Donald Trump. With his continued help, these crazed individuals, and many more like them, have managed to nearly bring down the nation. The epitome of this movement was the Jan. 6 insurrection of the U.S. Capitol. According to Time...

"More than 840 people have been arrested for storming the U.S. Capitol building on Jan. 6, 2021, with charges ranging from obstruction of an official proceeding to assault. But 17 months after the attempted insurrection, a significant number of rioters are still awaiting their sentencing."

One interesting comment is that, although there may be some crazies in the Democrat Party, this list is Republican-heavy; the reality is that Democrats just aren’t keeping pace right now in the crazy department. But one looney stands out in the areas of stupidity and lunacy, Lauren Boebert, Rep. from Colorado, most recently when she proposed an amendment in the House with the result...

"Lauren Boebert's legislation got blocked thanks to House panel's rule targeting 'lunatics.' House Rules Committee Chairman Jim McGovern (D-MA) has a new rule on his committee for people like Boebert. McGovern explained to Republicans that his new rule for his committee says if you're "batsh** crazy, you're not getting an amendment" after he blocked one of Boebert's amendments from going to the House floor."

Turning now to the instigator of all this mayhem, Donald Trump's latest rally "Flies off the Rails," as reported by The Daily Beast...

"The QAnon-peppered programming frequently flew off the rails Saturday, as speakers took severe issue with everything from McDonald’s being part of the 'deep state' to “demonic satellites” controlling the voting system in the United States."

Opening prayer today at Eric Trump and Michael Flynn’s QAnon event: “God, open the eyes of Pres Trump’s understanding, that he will know how to implement divine intervention. And you will not surround him with RINO trash, in the name of Jesus.” 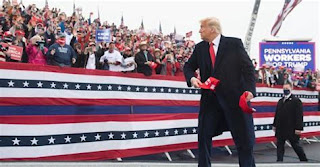 supporters is what keeps them flying off the rails. And the fact that he continues his terrorist activities, plus the fact he is threatening to run for President again in 2024, should chill the bones of any American who is in his or her right mind. Before I close, a return to Arizona where the politics are sown with lunatics and fertilized with the idiocy of Republican radicals.Arizona's unesteemed chairperson of the Arizona Republican Party, Kelli Ward, has "lost her attempt to block a House committee subpoena for her phone records in connection with an investigation into the Jan. 6, 2021, attack on the Capitol building and other events related to the 2020 presidential election," according to Politico. There are also a couple of daffy dingbats worth mentioning--that's all since they haven't been important enough to get a lot of media coverage.
They are Debbie Lesko and Andy Biggs, both full of misinformation and conspiracies but no substance. And the closing act is something I described as un-freaking believable. Wendy Rogers, an Arizona state Senator, urged voters to lie to poll workers on election day. E.J Montini, a local columnist, describes Rogers as a liar, sleezy and "the most unhinged member of the Arizona Legislature (which is saying A LOT).
But, one of the best comments comes from the local paper's opinion column. Dan Peel of Phoenix suburb Scottsdale who said in comparing the races of Katy Hobbs (D), and Kari Lake (R), commenting on Hobbs' accomplishments and Lake whose only real issue is Donald Trump, "just step back and see the big picture. Even if you can only support Hobbs as the ant-Lake candidate, do it. Our democracy and state truly depend on your vote."
YES, not only the state of Arizona but the entire country depends on your votes for Democrats if we are to save our democracy. GO TO THE POLLS ON NOVEMBER 8, AND ENCOURAGE ANYONE YOU SEE OR TALK TO TO VOTE. LIKE MICHAEL MOORE SAID, THIS COULD BE A DEMOCRAT TSUNAMI.
LATE FLASH...
We had another governor in Arizona like Kari Lake wants to be...the bigoted Evan Mecham. Arizona business detested him, and his discrimination of Martin Luther King Day made the state a national embarassment as well as losing the Super Bowl in 1993. Kari Lake, the right-wing conspiracy theorist, follows in his footsteps with her latest salvo aimed at major league football and...