Here's an idea to make the gun control issue work 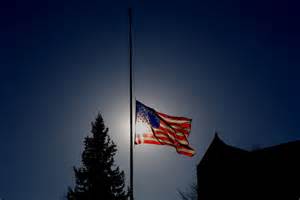 Fly the American flag at half-staff until Congress passes new gun control laws that will help curtail gun violence. This is not my idea. It is my wife's idea and she isn't even as close to the gun control movement as I am. But it is time that we realized the current loose gun laws and open availability of any kind of weapon that anyone wants is not working.

The National Rifle Assn.'s head, Wayne LaPierre, and his NRA minions can spout off their mouths all they want about the 2nd Amendment, but it is clear that their way has failed miserably. There have been 141 mass shootings in 2016. With 6,171 total deaths, 1,577 of them under the age of seventeen, 260 under eleven. If the American public can't understand this, there must be something wrong with their priorities.

So, how about lowering the flag to half-mast and leaving it there until we get some results on gun control legislation. I have researched this and it is legal to fly the flag at night as long as it is illuminated. The President can order this for government facilities but I am also talking about all those flags that are on display around the country, commercial and private, and around the world at other U.S. possessions. If we lead this movement here, maybe other countries hopefully will join in the cause and lower their flags to half-staff.

The purpose is to shame Congress into doing something about gun violence. So think about this over the weekend and follow my blog for more information. And please leave your comments that can be shared with others, particularly if your home or business agrees with the idea.